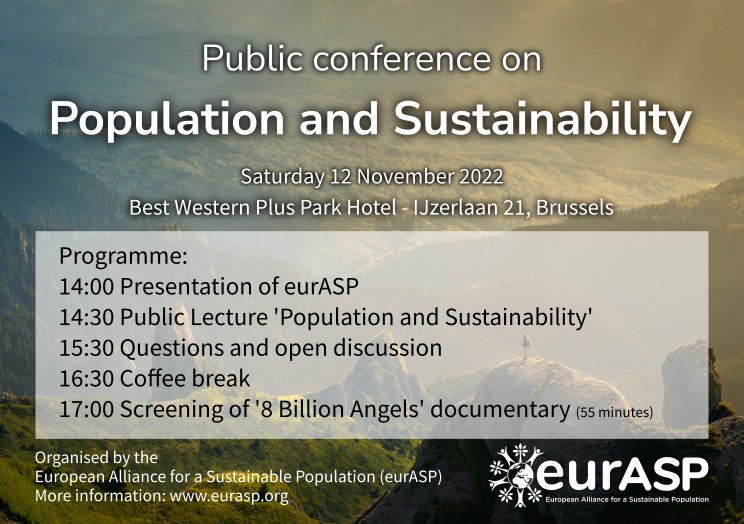 According to the UN’s World Population Prospects 2022 the world’s population is projected to reach 8 billion this November. The European Alliance for a Sustainable Population (eurASP) believes that this milestone cannot be ignored in these times of climate change, biodiversity loss and food and water shortages. Therefore, to mark this historic development, eurASP held a public conference on saturday 12 November 2022 in Brussels where it addressed the tension between population size and sustainability. You can download all the conference documents here:

Lecture 1: There is no alternative to limiting population size

Even if all people in the world would live at a moderate level of welfare, then many countries would still surpass their ecological boundaries. There is a gap between the average ecological footprint of all people in the world and the per capita footprint required for an acceptable standard of welfare. Some countries have enough resources to offer their actual population an acceptable standard of living, other countries will have to reduce their consumption and pollution level to achieve sustainability. But there are also a number of countries which are unable to realise an adequate living standard with their present population without ecological overshoot. For them there is no alternative to population reduction.

Jan van Weeren has an academic background in General Linguistics and Analytical Philosophy. His PhD is in Applied Linguistics. He was Assistant Professor at Leiden University and head of the department for secondary education of the Dutch National Institute of Educational Measurement. Currently he is secretary of the Dutch foundation against overpopulation ‘Stichting OverBevolking’.

Lecture 2: Family planning is the most effective climate protection

The scientifically most effective way to protect the climate and mitigate the collapse of civilization is to educate people to procreate responsibly and help those hundreds of millions without access to contraception. Almost half of all pregnancies (43% in Europe) are unwanted. Avoiding these also means avoiding huge CO2 emissions. The Quality Family Planning Standard (QFPS) of BOCS scientifically calculates the climate-protective outcome of work for the human right of contraception (UN declaration, 1968). The resulting Quality Family Planning Credits (QFPC) can be used for carbon offsetting.

Lecture 3: The weight of population growth in three decades of increasing carbon emissions

A dominant narrative is that addressing population is not relevant to mitigating climate change because population is only growing in the poorest countries, whose contribution to global emissions is negligible. However, this narrative does not fit the data: an analysis of population and per-capita emission changes in the four income-based country groups shows that population is growing in all groups and has contributed in a relevant way to the total emission increase.

Lucia Tamburino has a background in Mathematics and Natural Sciences. She holds a PhD in Forest Ecology and has a post-doctoral research experience at SLU (Swedish University of Agricultural Sciences).

Lucia is currently a researcher at IGDORE (Institute for Globally Distributed Open Research and Education).

No comments to show.